HARA COVID-19 protocols for flyers at our launches 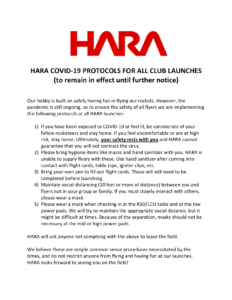 On July 16, 2019, the rocket center attempted to launch 5,000 model rockets in an effort to set the record as part of a week-long celebration of the 50th anniversary of the first moon landing. More than a year later, it’s official. Guinness certified that 4,923 rockets fired and reached at least 100 feet in altitude – a requirement for the record. No reason was given why it took a year to announce the record, the paperwork was filed with the numbers a few days after the launch. The previous Guinness World Record of 4,231 model rockets were launched at Teylingen College during a European Space Science Convention in the Netherlands, in the summer of 2018. 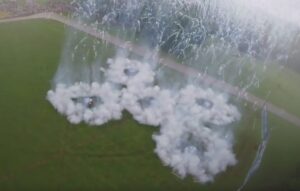 Join us on Zoom this Thursday (September 3) at 7:30 PM for our monthly club meeting. This month’s agenda includes:

See you on the field in October!

You will now see a “Max-Q Newsletter Archive” item under the “About Us” menu on the HARA website. This is where I have begun to place scanned copies of the old HARA newsletter, Max-Q. Now replaced by social media, Max-Q served as the primary means of communication among HARA members for much of the club’s existence since its founding back in 1979. The issues contained launch summaries, kit, motor and product reviews, rocket plans, and lots of other stuff. It was very well produced at the beginning, but as time went along, you can see the annual number of issues decrease and the number of pages go down – a common problem with section newsletters. They take a lot of work, and it is very hard to get people to contribute content as the years go by. Max-Q has not been produced for a long while, as it is much easier to do a blog or Facebook post.

Nonetheless, much of the history of HARA is contained within the issues of MaxQ, and as I was scanning them, I realized that they were of value and needed to be made accessible to the club and those outsiders who may have an interest. So I carved out a spot on the club web site – here’s the URL:

Vince has been prodding me for many moons to complete scanning the newsletters, but my progress has been slow. My scanner is an older model, and it often takes a few tries to get a decent quality scan. This, combined with higher priority demands on my time, will result in the slow add of more issues as time progresses. Hopefully my pace will be faster during the hot muggy summer.

Enjoy the Max-Q folks – there are some good things in there!

Please watch here or the HARA Facebook page for any announcements of other launches.

The April club meeting, scheduled for this Thursday, April 2, at 7:30 PM will be held via cyber conferencing (or whatever it is called). Members should have received an email through the HARA mailing list. If you didn’t get it, or wish to join, send an email to hara+subscribe@groups.io

“See” you this Thursday night!

It takes a lot of faith to load up rockets on a morning when it’s sprinkling rain. Then more faith after you arrive at the field to sit in the car to wait for the shower to pass at noon. But when you finally squish your way out to the pad and the motor exhaust smoke from your flight just hangs over the rack because there’s no wind you’re glad you made the trip. HARA got out on ‘pi’ day (3.14) and enjoyed a mild winter afternoon after two months of denial due to floods.

The motor count for Saturday taken from the flight cards shows most of the thirty flights were high power.

Almost all of the H flights were for L1 Certification. The two L flights were by the UAH student team shown prepping in the above photos. For another story on the UAH rocket see –https://www.al.com/news/huntsville/2020/03/nasa-student-launch-works-around-covid-19-restrictions.html

Greetings!
After a final field inspection, it appears that conditions at Jackson 5 will support our launch tomorrow as scheduled!

Also considering the virus and flu season and all that, may want to exercise the 6′ rule when chatting rockets with folks.