We don’t get many requests for launch demonstrations after Thanksgiving, but that’s when Lincoln Academy called us to help them with their Spaceweek. They had heard there was a rocket club in town and found our website. The best time we could support it was Friday afternoon (11/30) when Bill, David, Woody and I agreed to bring out rockets to fly. Lincoln Academy is a new private K-7 church school  that took over the old Lincoln Elementary building just this year. Their playground was a minimal size for recovering anything above a B motor, but we knew how to fly it. 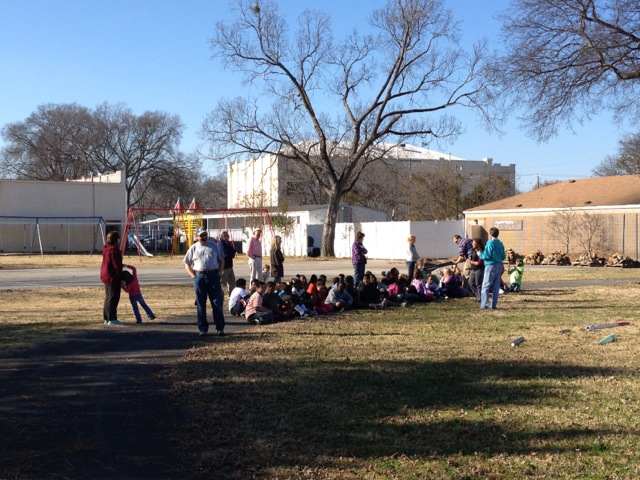 Vince addresses the kids at Lincoln Academy before the launch

The weather was very mild and clear that afternoon that made the launch easy. David and I gave a brief talk and showed some display models as the children sat on the track. They really liked David’s big black carbon fiber rocket and wanted to touch it. We had three porta-pads set up with two firing systems. Despite a charging all morning and checks with a voltmeter, my battery would not fire an igniter when I set it up. Fortunately Woody had plenty of power in his and I did not have to pull out my backup system from the truck. I launched three standard rockets on A motors that came down on the grass. Woody put up a model on a B that was the highest of the day and went over the fence into other property. Bill fired a Snitch and David fired the ‘Hexagon of Doom’ on an E9 that made enough smoke and fire for everyone. The kids loved giving the countdowns and the teachers were pleased with our performance. We hope that ‘rockets’ are now on all their Christmas lists.