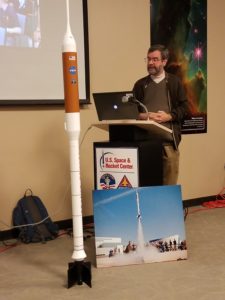 Meeting Notes
We had a few new faces around the HARA meeting hall. There were over twenty people in all. So, thank you to all you new folk for coming, and we hope you come back. Both Vince and Bill gave great Tech Talks. Vince share his story behind the flight of his scale NASA Ares I rocket, commissioned by NASA for gaining public interest in the program through rocketry. Bill delivered an energizing talk about to upcoming ‘Great American Solar Eclipse’ to occur on August 21, 2017. And we are within driving distance of it. Bill regaled us with tales of the 1979 eclipse he witnessed, and gave tips to would-be watcher. Thank you gentlemen for your presentations. Vince’s is available on the HARA website at the link above. Bill’s presentation will be available soon.

After the occasional loss of our ERC meeting hall to seemingly strange events occupying the space or being locked out of the ERC all together, member Bill Cooke began to investigate. The chain of communications led him to contact wit he USSRC’s Director of Protocol & Community Relations, Celia Lee. In the +10 years of our club’s stewardship of the spot every first Thursday of the month, USSRC personnel came and went. Awareness of our club’s utilization of the space faded, and eventually vanished. That is why Ms. Lee was very surprised to hear we had been using the space. IT also explained why other events occasionally displaced us. The USSRC rents to space for $500 an event.
Ms. Lee did propose an option for HARA to use the space, free of charge, as HARA qualifies as a non-profit organization. Bill drafted a request for waiver of the customary fee, which was accepted by the USSRC committee. It did however come with some conditions.

The USSRC proposed the following arrangement:

The club may occasionally be displace by paying events, but the USSRC will notify us in advance to make alternate meeting arrangements. Reasonable as they were, this was a matter for discussion with the membership. During meeting, members offered their thoughts on the matter. Alternatives were also presented by VP John Jenkins, and TRA Prefect Art Woodling. But, in conclusion, the club voted to accept the conditions and see how this arrangement worked for a year. Bill ask Ms. Lee to draft a formal Memorandum of Understanding (MOU) between HARA and USSRC, and identified President Daniel Cavender to be the club POC for further actions. We will meet in the USSRC’s ERC for our next meeting on March 2nd.
Biergarten 2017
HARA has applied to host another Biergarten night for 2017. Last year, HARA was a featured non-profit organization in 2016. The club made more than $700 dollars, just for drinking beer and talking about rockets under the Saturn V for 3 hours. There are way worse ways to make money. If we get selected again for 2017, please try to make it a good showing.
FAA Waivers
The FAA waivers and Authorizations for 2017 have been approved. The waiver for Manchester TN launch site is 17,999’ and below. Though the waiver allows for flights up to 17,999’, the FAA and/or the managing club (HARA or MC2) may restrict the launch ceiling based upon local weather conditions, and activity in the area. The Tony, AL launch site waiver is for flights up to 12,000’. The Tony launch site is reserved for NASA’s Student Launch Projects launch, held April 8-9th.